Obama and Medvedev to Negotiate on Arms Pact in Copenhagen

The United States and Russia seem to get closer to agreement on a new arms control treaty that will reduce their strategic nuclear arsenals by at least one quarter. 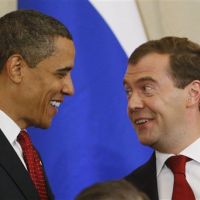 Obama and Medvedev to Negotiate on Arms Pact in Copenhagen

But even if the two sides manage to bring home a deal in coming days as they hope, that will be the easy part. After President Obama and President Dmitri A. Medvedev of Russia sign the new pact, they plan to send negotiators back to the table next year to pursue a far more ambitious agreement tackling whole categories of nuclear weapons never before subject to international limits.

The talks envisioned for 2010 would continue to advance Mr. Obama’s disarmament agenda and attempt what no president has managed since the dark days of the cold war. In addition to further reducing deployed strategic warheads, the negotiations would try to empty at least some vaults now storing warheads in reserve. And the two sides would take aim at thousands of tactical nuclear bombs most vulnerable to theft or proliferation, some still located in Europe 20 years after the fall of the Berlin Wall, The New York Times reports.

Meanwhile, Mr Medvedev and Mr Obama had first pledged to sign the successor treaty by the time the original agreement expired. Then officials on both sides said the deal would be signed by the end of the year, possibly in a European capital.

But reports said that after the new pact was signed both presidents plan to send negotiators back to the table next year to pursue a far more ambitious agreement tackling whole categories of nuclear weapons never before subject to international limits, Times Online reports.

It was also reported, talks on a replacement for START-I had stumbled in recent weeks, but both sides had said they expected an agreement soon.

White House spokesman Robert Gibbs said on Thursday the discussions were making good headway but the United States was not interested in doing a deal for its own sake.

Obama and Medvedev had wanted a new treaty by December 5, but that deadline passed and the old accord was extended indefinitely while negotiators in Geneva tried to forge a new pact, Reuters reports.