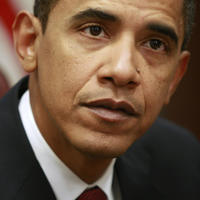 Arriving after an overnight flight from Washington, Obama brought little new beyond pleas for other nations to step up and earnest promises of U.S. seriousness. Hours ahead of his arrival, a European Union spokesman said an agreement had not yet emerged to present to leaders; delegates grumbled that a final statement was likely to be based on politics and not concrete steps to confront climate change.

Such a political deal would be seen by many as a setback, following two years of intense negotiations to agree on deeper reductions in the emissions of carbon dioxide and other gases largely blamed for global warming.

Obama spokesman Robert Gibbs openly discussed on Thursday the possibility the conference could end up a bust — a kind of lowering of expectations that could be an attempt to inoculate Obama from the fallout, or a negotiating ploy to scare recalcitrant nations into making moves of their own, The Associated Press reports.

It was also reported, delegates spoke of continuing disputes behind closed doors between developed and developing countries, the divide that has dogged the two-week U.N. climate conference from the beginning.

Swedish Environment Minister Andreas Carlgren said no agreed text had emerged just an hour before the presidents and premiers were to gather at a Copenhagen convention hall.

''It is now up to world leaders to decide,'' he said, suggesting they would have to make last-minute decisions on the thrust of the climate declaration. He blamed Chinese and U.S. positions for the morning's impasse.

Just before Obama landed in Copenhagen for the half-day of meetings and ceremony, a leading African delegate complained bitterly about the proposed declaration. ''It's weak. There's nothing ambitious in this text,'' said Sudan's Lumumba Di-Aping.

Any agreement is expected, at best, to envision emissions-cutting targets for rich nations and billions in help for poor countries, but to fall well short of the goal of a legally binding pact, The New York Times reports.

In the meantime, the agreement Obama is hoping for out of Copenhagen would not be a treaty, nor would it be legally binding. White House spokesman Robert Gibbs acknowledged it would be "a political agreement that would lead to a treaty" later.

The last time the president traveled to Copenhagen -- in October to try to win the 2012 Olympic bid for Chicago -- he came back empty-handed.