Thursday the United States announced it would help build a $100 billion annual fund by 2020 to help developing countries cope with climate change. 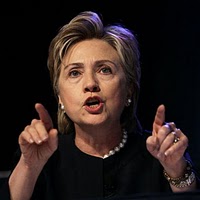 Seeking to unblock an impasse in climate talks, Secretary of State Hillary Rodham Clinton said the United States would only commit to building the fund if nations gathered here for global climate talks produce an international accord that includes emission reduction commitments from both developed and major developing countries; financial and technological assistance for poor countries; and a way to independently verify the cuts all nations made.

"We're running out of time," Clinton said at a news conference. "Without the accord, the opportunity to mobilize significant resources to assist developing countries with mitigation and adaptation will be lost," The Washington Post reports.

Meanwhile, it was also reported, the U.S., China and the European Union, the world’s biggest polluters, are racing against the clock to complete a climate change deal with one day left of UN talks in the Danish capital. Negotiators have yet to agree on measures to confirm how nations will limit gas discharges they promise.

“The U.S. is ready to do our part,” Clinton told reporters today at the Bella Center in Copenhagen where the talks are taking place. Failure to meet U.S. conditions on monitoring reductions is a “deal breaker,” she said.

Formal negotiations resumed today after a decision to proceed with two UN drafts, one that extends the existing Kyoto Protocol climate accord and a new agreement that calls for emissions curbs from developing nations.

An accord that sets out details on financing and technology for poor nations as well as an agreement to limit temperature rise to 2 degrees Celsius (3.6 degrees Fahrenheit) is still possible, U.K. Prime Minister Gordon Brown said today, Bloomberg reports.

Arriving hours earlier in Copenhagen, Clinton said the plan--which entails significantly higher financial commitments than the U.S. has previously made to developing nations --would involve public and private money.

But Clinton said the U.S. wouldn't commit to the plan unless all major economies commit to various provisions, including carbon-emission reductions that are verifiable and transparent.

"If there isn't a commitment for transparency of some sort, that would be a dealbreaker," she said to a packed hall of journalists, The Wall Street Journal reports.