Wednesday New York's Metropolitan Transportation Authority approved drastic service cuts as part of its budget for 2010. That is supposed to close a nearly $400 million budget gap. 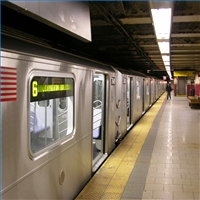 The service cuts would include closing two subway lines, cutting station agents, slashing weekend and overnight service, and forcing pupils to pay for their travel to school, but MTA Chairman Jay Walder, at a webcast board meeting, promised to review the cuts over the next few weeks to see if their impact can be lessened.

"There won't be an answer that will take the pain away," Walder told reporters. "We may be able to do it a little better."

There is still a risk that subway, bus and commuter rail fares and tolls on bridges and tunnels will have to be raised this year if revenues again fall short, Walder said. Fares and tolls are currently scheduled to rise in 2011 and 2013.

The deficit-plagued MTA, the largest U.S. mass transit agency with about 10 million daily riders, had dodged the service cuts in the spring after a state bailout, but the state rescue unexpectedly fell short, causing a late-year deficit, Reuters reports.

It was also reported, the Metropolitan Transportation Authority is facing a $383 million budget shortfall.

The MTA will hold public hearings and vote again. That leaves an opening for an 11th-hour rescue by the city or the state.

The policy of free or discounted student rides has been in place since 1948. Ending it could cost half a million students nearly $1,000 per year in transportation fees, The Associated Press reports.

In the meantime, late last month, state legislators cut $143 million out of the authority’s budget; state accountants then determined that a payroll tax dedicated to mass transit financing would produce $100 million less revenue than initially thought. Finally, late last week, a court ruled that the authority must pay significant raises to transit workers, adding tens of millions of dollars in expenses.

Jeffrey A. Kay, a mayoral appointee to the board, denounced state legislators for “pulling out the rug” from the transportation authority.

“They were the ones who put together a deal and said you are fine for the next two years; it was their deal that fell apart,” Mr. Kay said in an angry speech. “The politics has to stop. The public and the riders have to go through this, and they’re caught in the middle of it.”

None of the cuts would take effect until June at the earliest. A fare increase of 7.5 percent is already scheduled for 2011, The New York Times reports.