Iran passes from words to deeds. The eastern country  has successfully test-fired an improved version of a medium-range missile. 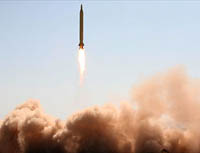 The Sajjil-2 has a longer range than previously-tested missiles which could travel 2,000km (1,243 miles), Iran's Arabic-language TV station announced.

That range would put Israel and US bases in the Gulf within range.

Correspondents say it is not the first time this missile has been tested, but the timing is likely to add to current tension over Iran's nuclear ambitions.

The West says that Iran is trying to build nuclear weapons, a charge Iran denies.

"This is a matter of serious concern to the international community and it does make the case for us moving further on sanctions," he said.

The French Foreign Ministry said the launch was "very worrying".

"A test of this kind can only strengthen the international community's worries at a time that Iran is also developing a nuclear programme with no identifiable civil objective in violation of five United Nations Security Council resolutions," spokesman Bernard Valero said.

Like the missiles tested in September, the missile launched on Wednesday uses solid fuel in its two-stage rocket.

Solid fuel rockets can be prepared for launch in less time than those using liquid propellant rockets.

The government's refinements to its rocket programme will increase tensions over Iran's nuclear ambitions.

The six nations negotiating with Iran on that issue want to prevent the government from enriching uranium to weapons-grade.

Iran has declared it will open 10 more nuclear sites and enrich uranium to a higher degree than it has publicly announced before.