No Calm for Italian Premier in Hospital

An Italian police detained a young man who managed on Wednesday to reach the hospital floor where Premier Silvio Berlusconi was recovering from an attack, the police proved him to be harmless. 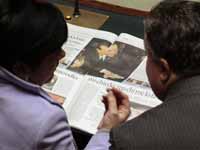 No Calm for Italian Premier in Hospital

A Milan anti-terrorism police official said the man "wanted to pay a visit on the premier at 2 a.m." Wednesday and made it to the entrance of the seventh floor of Milan's San Raffaele Hospital where Berlusconi, 73, and other patients were being treated. The official spoke on condition of anonymity because he didn't have advance authorization to talk with a reporter.

The man, whose identity was not immediately released, was unarmed when he reached the seventh floor, the official said.

Berlusconi was struck in the face with a statuette on Sunday night as he signed autographs at a rally in Milan. The attack broke his nose and two teeth and cut his lips. Police said the attacker, Massimo Tartaglia, a Milan man suffering years of psychological problems, has been detained. Doctors were expected to examine the premier and media mogul before discharging him later on Wednesday.

A Milan judge on Wednesday denied a request by Tartaglia's lawyers for their client to be transferred from San Vittore prison to the psychiatric ward of a hospital, Italian news reports said. The judge also upheld the arrest warrant.