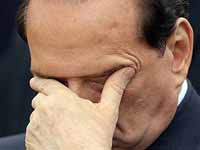 A spokesman for Silvio Berlusconi says the hospitalized Italian premier had more pain in the night but enjoyed receiving a phone call from President Barack Obama.

Paolo Bonaiuti said Wednesday that Berlusconi's pain had "sharpened" a bit, and that an old neck problem was also causing him pain.

The premier suffered a broken nose and two broken teeth Sunday when a man hit him in the face with a statuette after a pro-Berlusconi rally in Milan.

Officials at Milan's San Raffaele Hospital say Berlusconi is expected to be released later in the day.