Boeing Co.’s 787 Dreamliner completed a maiden flight that pilots said was "a joy," countering frustrations from a two-year delay and kicking off at least nine months of testing before the jet can enter service. 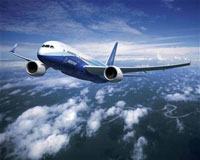 The showing impressed the vice president of All Nippon Airways Co., the Japanese carrier that will be the first to receive the Dreamliner, with delivery now planned for late 2010 instead of the original target of May 2008.

“After the test flight, I feel confident the schedule will be on time and we will receive the aircraft as scheduled,” All Nippon’s Mitsuo Morimoto said in an interview at Boeing Field in Seattle, home to the planemaker’s manufacturing base.

The composite jetliner was airborne for about three hours yesterday instead of the planned five, landing early because of rainy weather, according to Bloomberg.

The Dreamliner is the first commercial aircraft to be made mostly from composites rather than conventional aluminum and steel.

Aviation analyst Richard Aboulafia, of The Teal Group, says certification should take at least 12 months. Then, he says, Boeing must get production volumes up and "improve the plane so that it comes close to being the plane that it was promised to be." That, he says, "may take them 200 or so planes to do."

Another analyst, Jon Ostrower, who has tracked the 787's star-crossed development, says the six delays that pushed back the Dreamliner's first flight more than two years did produce a benefit: more opportunity to work out bugs in advanced systems on the plane that flew Tuesday, USA Today reports.

After three hours airborne, the Dreamliner landed at 1:33 p.m. in a steady rain at Boeing Field. Among the highlights of the flight, the pilots said, was the interest by air traffic controllers and other pilots about the plane's first flight. And they got the chance to try out the 787's windshield wipers, which performed as expected, they said.

Going forward, the results of the first flight will be analyzed and a second flight is not expected for another week or so, Boeing officials said. The company hopes to get the second of six Dreamliners aloft by Christmas, Wall Street Journal reports.