A group of 87 Democratic lawmakers presented Tuesday a draft bill for comprehensive immigration reform that would pave the way to legalize undocumented immigrants in the United States. 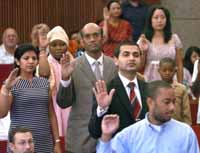 President Barack Obama has said he wants to "recognize and legalize" undocumented immigrants in the United States, but the White House's intentions have been hampered by a host of other pressing issues including stabilizing the US economy, wars in Afghanistan and Iraq, and tense climate change negotiations.

Congressman Luis Gutierrez introduced the "Comprehensive Immigration Reform for America's Security and Prosperity (CIR ASAP) Act of 2009" in the Capitol building, surrounded by scores of activists and families of immigrants.

"The only way we're going to win is if we show that (this bill) is greater than" just another piece of legislation," he said.

The reform aims to "secure our borders and learn who is in this country," added fellow Democrat Solomon Ortiz.

No Republican lawmaker backed the bill at its introduction.

Two previous attempts at immigration reform, both with some bipartisan support, failed to pass the US Congress in 2006 and 2007, despite some support from the White House.

Lawmaker Nydia Velazquez pleaded for the bill's advancement, saying "for those who say that given the state of our economy this is not the time, I will say there's no wrong nor right time, it's a moral obligation.

Obama announced in June that Homeland Security Secretary Janet Napolitano would join congressional leaders to form a working group on immigration reform to work on concrete proposals to "secure our borders" and offer the millions of undocumented immigrants in the United States a chance to obtain legal status.

But he also acknowledged the differences between members of Congress on how to best address immigration reform.

"There is not by any means consensus across the table," Obama said, describing immigration reform as a "sensitive and politically volatile issue."