Facebook and Bebo enables the fans of the royal family to  follow Prince William's first official overseas visit on behalf of the Queen. 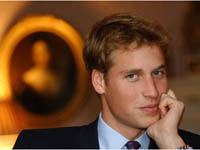 The New Zealand government has set up pages on the social networking sites where it will list pictures and information about January's three-day trip.

The web pages have been created following a request from the New Zealand Government to St James's Palace as a large majority of its citizens stay in touch with each other and events using the popular internet sites.

Both web domains have posted the same picture of the royal dressed in a dark suit and red tie alongside an image of a silver fern - the most famous plant of New Zealand.

A handful of fans have already registered with the pages and brief details of the official itinerary are available.

The main highlight of the visit will see William open the country's new Supreme Court building in the capital Wellington.

Following the trip the prince will spend three days in Australia for an unofficial visit where he will meet members of the Aboriginal community, and families who lost their homes in the devastating bush fires earlier this year.

William's private secretary Jamie Lowther-Pinkerton said the Queen had been asked if she would open the Supreme Court by the New Zealand authorities, and she in turn asked the prince if he would represent her.

He added: "He will be accompanied throughout the visit by the prime minister of New Zealand which is a great honour for him. Prince William's visit to New Zealand will allow him to build on some of the close friendships he established there in 2005."

The royal visited the country in a private capacity in 2005 to follow the British and Irish Lions rugby tour.