Raul Castro on Sunday declared the global climate summit in Copenhagen a failure from the start and urged leftist Latin American leaders to devise their own plan on how to cope with climate change. 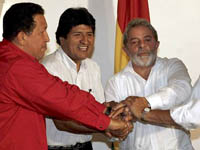 Addressing a two-day meeting of the leftist Bolivarian Alternative for the Americas trade group, Cuba's president said that though Copenhagen should produce "concrete, verifiable steps to confront the effects of climate change, we already know there will be no agreement."

Castro said that instead, the world "can only wait for a political pronouncement." Cuba has not sent any representatives to participate in the global climate summit, where world leaders hope this week to forge the framework of a plan to limit the causes of global warming.

Castro implored leaders from the nine-country group gathered in Havana to devise their own "firm position on this decisive matter for the future of the human species."

The trade group was formed by Venezuelan President Hugo Chavez, a self-described socialist, as an alternative to U.S.-backed free-trade consortiums. Its members are Venezuela, Cuba, Nicaragua, Honduras, Ecuador, Bolivia, Antigua and Barbuda, San Vincent and the Grenadines, and Dominica.

Chavez responded to comments made earlier in the week by U.S. Secretary of State Hillary Rodham Clinton, who warned Latin American nations to "think twice" about building ties with Iran.

Venezuela's president, who has traveled to Iran, said that "Mrs. Clinton's declarations (were) like a threat, more than anything against Venezuela and Bolivia but also against all" members of the trade bloc.