Berlusconi Feels Well, though still in the Hospital

Italian Prime Minister Silvio Berlusconi will stay in the hospital at least "another 36 hours," his doctor Alberto Zangrillo said Monday, following an attack that left Berlusconi with broken teeth and a fractured nose. 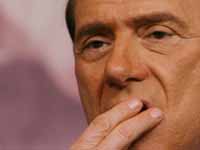 Berlusconi Feels Well, though still in the Hospital

The man accused of hitting controversial Italian Prime Minister Silvio Berlusconi in the face with a replica of Milan's cathedral was charged with grievous bodily harm and held overnight, Milan police said.

Massimo Tartaglia was kept in Milan's San Vittore prison. Under Italian law, police can hold him for up to 48 hours without a judge's order.

The suspect has a history of mental illness, according to Milan police. The suspect's father said he had never committed a violent act before, Italian media reported.

Anti-terrorist prosecutor Armanda Spataro has been assigned to investigate the assault, police said.

The attack at a campaign rally Sunday in Milan left Berlusconi bleeding profusely from his left upper lip and cheek. The premier underwent a CAT scan at Milan's San Raffaele Hospital, and his personal physician, Alberto Sangrillon, recommended more tests be done.

Berlusconi is feeling well as of Monday morning. When he woke up, he asked for the newspapers, reports said.

Berlusconi, a conservative media mogul-turned-politician, has been dogged by allegations of corruption and is the middle of a messy divorce from his second wife. He was in Milan, his hometown and political base, to stump for a local political ally, and blamed his legal woes on his political opponents during the rally.

Berlusconi remains popular among the Italian public, however, with his approval ratings remaining well over 50 %. He won a third term in 2008, and his conservative coalition has control of both the Italian Chamber of Deputies and the Senate.

CNN International  has contributed to the report.