Copenhagen climate summit talks have been suspended after poor countries withdrew their co-operation. 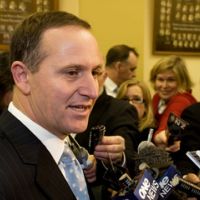 Delegations were angry at what they saw as moves by the Danish host government to sideline talks on more emission cuts under the Kyoto Protocol.

As news spread around the conference centre, activists chanted "We stand with Africa - Kyoto targets now".

Informal talks continue, and the UN climate convention head said the formal agenda should resume in the afternoon.

The countries which have suspended co-operation are those which make up the G77-China bloc of 130 nations. These range from wealthy countries such as South Korea, to some of the poorest states in the world, BBC News reports.

It was also reported, d eveloping nations have threatened they will not return to talks until the dispute is resolved.

The protest comes as the talks enter their second and final week, and some leaders warned the effort might fail.

Australian Prime Minister Kevin Rudd told Sky News Monday there is a chance the summit will end in failure, while British Climate Change Minister Ed Miliband called for more urgency, saying the summit is "not on track for the kind of deal" needed.

Leaders from around the world are preparing to descend on Copenhagen later this week for the summit's climax. But disagreements remain over how much each country will need to cut greenhouse gas emissions blamed for global warming, and who will pay for the cuts.

In an interview with the Financial Times, Chinese Vice Foreign Minister He Yafei accused rich countries of planning to blame Beijing for the summit's failure. He also said those nations have a "legal obligation" to help developing nations pay for needed changes, although China does not expect to get any of that money, Voice of America reports.

In the meantime, e arlier Monday, British Climate Change Secretary Ed Miliband said it is up to him and his counterparts in Copenhagen to help bridge that gap between rich and poor countries and "not to leave everything" to the 100 world leaders -- including President Barack Obama -- who start arriving Wednesday.

"There are still difficult issues of process and substance that we have to overcome in the coming days," Mr. Miliband said. "Can we get the emission cuts we need? We need higher ambition from others and we will be pushing for that," The Wall Street Journal reports.