Even Big U.S. Cities Does not Mind Gay Rulers

The southern city of Houston late Saturday became the largest US metropolis to elect an openly gay mayor when Annise Parker, an open lesbian, claimed a solid victory over her rival. 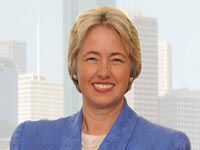 Even Big U.S. Cities Does not Mind Gay Rulers

"I know what this win means to many of us who thought we could never achieve high office," she said in her victory speech, at which she introduced her partner Kathy and their three children, according to the Houston Chronicle.

"I understand, because I feel it, too. But now, from this moment, let us join as one community," said Parker, 53.

According to local election data, Democrat Parker won about 53 % of the vote and opponent Gene Locke, also a Democrat, took 47 %.

Houston is the fourth-largest city in the United States and the largest city in the state of Texas. The city has a population of 2.2 million within an area of 600 square miles (1,600 km2). Houston is the seat of Harris County and the economic center of the Houston–Sugar Land–Baytown metropolitan area—the sixth-largest metropolitan area in the U.S. with a population over 5.7 million.

Throughout her campaign, Parker enjoyed the support of gay and lesbian political organizations nationwide, though she did not make her sexual orientation a key issue in the campaign.

Parker has worked in the Houston city administration for the last 11 years -- first on the city council, and for the last five years as city controller.

She spent 20 years in the oil and gas industry before entering public service, according to the AFP's report.