Iran needs up to 15 nuclear plants to generate electricity, its foreign minister said on Saturday, underlining Tehran's determination to press ahead with a programme the West suspects is aimed at making bombs. 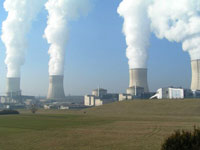 "First I think we could just totally abandon the whole thing or we could propose something more moderate, a kind of middle way ... Iran has done that," he said , Reuters informs.

"We need 10 to 15 nuclear plants to generate electricity in our country," Mottaki said.

According to Chicago Tribune, the Obama administration signaled its intention Friday to push for punitive new sanctions against Iran, warning across a broad front that tough measures are likely and urging reluctant nations not to circumvent them.

Secretary of State Hillary Rodham Clinton, meanwhile, warned in Washington that Latin American countries, in particular, will face "consequences" if they "flirt" with the Islamic Republic.