Taxing on Banker Bonuses to Be Used for Combating Climate Change 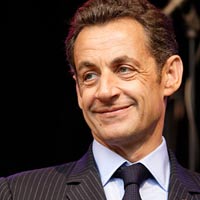 Taxing on Banker Bonuses to Be Used for Combating Climate Change

We can only tax them if we tax them both sides of the Channel,” Sarkozy said in Brussels today. “In the decision that Gordon and I are taking together, we want and we wait for others to do the same, because we are in a globalized world.” He said “I see many declarations of heads of states joining us.” Sarkozy didn’t give any details on the French plan.

France and Britain are the first nations since the beginning of the financial crisis to target bonuses with a tax. German Chancellor Angela Merkel is unlikely to follow. Deutsche Bank AG Chief Executive Officer Josef Ackermann said yesterday banks there will exercise self-restraint on pay.

Chancellor of the Exchequer Alistair Darling said Dec. 9 all banks in the U.K. awarding discretionary bonuses of more than 25,000 pounds ($40,000) between now and April must pay a levy of 50 percent. France will enact a tax next year on 2009 banker bonuses, Sarkozy said. The levy will apply to bonuses exceeding 27,000 euros ($40,000), two officials said yesterday , Bloomberg reports .

It was also reported, a tax on banking could be used to pay for combating climate change under plans pushed by Gordon Brown and Nicolas Sarkozy today as Britain almost doubled the cash it put up for short-term funding to help developing countries to go green.

The Treasury found £1.5 billion in so-called fast-track funding from 2010 to 2012 for clean fuel projects and to stop deforestation in developing countries, the Prime Minister said after an EU summit in Brussels.

This was a big increase on Britain's initial offer of £800 million for a voluntary international fund to help encourage progress in climate talks at Copenhagen but Mr Brown suggested that there would be no extra call on taxpayers because the money was already budgeted for.

It means Britain is offering the largest EU contribution to the fund, followed by France and Germany on €1.26 billion each over the three years.

Mr Brown and Mr Sarkozy held a rare joint press conference designed to show that they had put recent differences over EU appointments behind them and called for the International Monetary Fund to research the use of a banking tax as well as aviation and shipping fuel tax to fund longer term climate measures, Times Online reports.

In an effort to play down any discord, French officials this week described the relationship between Brown and Sarkozy as excellent.

"If there are two heads of state or government who are exactly aligned, it's Gordon Brown and Nicolas Sarkozy, perhaps even more in accord than Sarkozy and (German Chancellor) Angela Merkel," one official said. "All this chit-chat about the City is nonsense."

Instead, Sarkozy and Brown have found common ground in a desire to impose special taxes on large banking bonuses.

"They are both completely aligned on the importance of that sort of scheme to ensure that going forward we don't repeat the same mistakes of the past," Brown's spokesman said, The New York Times reports.