Barack Obama's Nobel acceptance speech at was "a blockbuster even by Obama's lofty standards." 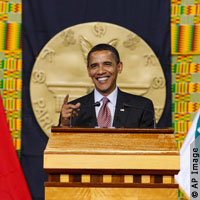 Friday US media and opinion makers had largely positive views of Barack Obama's Nobel Peace award speech in Oslo, with conservatives especially delighted with his choice of words.

"We've said before ... that awarding President Obama the Nobel Peace Prize after so short a time in office and so few concrete accomplishments was a mistake," wrote the Los Angeles Times in its newspaper editorial.

The speech "should serve as a blueprint to guide international decisions on alleviating conflict, poverty and tyranny," the LA Times wrote.

For the New York Times, Obama "gave the speech he needed to give, but we suspect not precisely the one the Nobel committee wanted to hear" by constantly mentioning the Afghanistan conflict , AFP reports .

It was also reported, i n his speech Thursday, President Obama delivered a mix of realism and idealism, implicitly criticizing both the Rev. Dr. Martin Luther King Jr. as inadequately appreciating the dangers of the world, and President George W. Bush as too quick to set aside fundamental American values in pursuit of security. And he embraced the concept of American exceptionalism, the idea that the United States has a special role as a defender of liberty, even as he promoted multilateralism.

In that way, he continued a pattern evident throughout his public career of favoring pragmatism over absolutes.

The address — delivered at once to a European audience that has grown skeptical about American power and to a domestic audience watching closely to see how he would handle the acceptance of an award that even he acknowledged he did not yet deserve — represented one of the broadest declarations of his foreign policy doctrine. He said that others deserved the award more, noting that his “accomplishments are slight,” but he accepted the prize with a strong endorsement of America’s place in the world.

“"Whatever mistakes we have made, the plain fact is this," Mr. Obama said. "The United States of America has helped underwrite global security for more than six decades with the blood of our citizens and the strength of our arms," The New York Times reports.

News agencies also report, many also pointed out that nominations for the prize closed 11 days after Obama was inaugurated as president.

Obama had said he was "surprised and deeply humbled" that he was chosen by the Committee, and made clear that he would use it as a call to action.

"Let me be clear: I do not view it as a recognition of my own accomplishments," the President had said. "To be honest, I do not feel that I deserve to be in the company of so many of the transformative figures who've been honored by this prize... But I also know that this prize reflects the kind of world that those men and women, and all Americans, want to build -- a world that gives life to the promise of our founding documents. The Nobel Peace Prize has not just been used to honor specific achievement; it's also been used as a means to give momentum to a set of causes."

The award consists of a medal, a diploma and money worth $1.4 million (10 million Swedish Krona). The White House has said the prize money will be donated to charity, AHN reports.