Government-armed former militiamen freed nine more hostages they seized in the remote southern Philippines, and their leader demanded Friday that murder charges against them be dropped before they release 48 other captives. 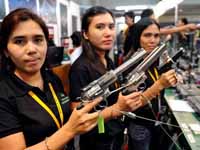 The abductions Thursday by 15 gunmen raised new questions over the Philippines' long-standing policy of arming civilian volunteers to protect against insurgencies. Just a day earlier, 100 other militiamen in the south were named suspects in the massacre of 57 people in the country's worst political massacre, prompting the government to order a review of the security policy.

Hours after the kidnappings, a government negotiator persuaded the gunmen to free 17 schoolchildren and an elderly woman among more than 70 people they initially seized. As negotiations resumed Friday, the gunmen released nine more — eight women and a man — negotiator Josefina Bajade said.

"There will be another round of negotiations for the remaining hostages," she told the reporters, "We cannot get them all in one go."

Police said they were trying to arrest two brothers among the gunmen on murder charges. One of the brothers, Joebert Perez, the gang leader who was negotiating with Bajade, met with reporters outside three huts where the hostages were being held.

Perez said the charges against him were fabricated and blamed a rival clan, the Tubays, for the killing of six of his siblings since last year. He demanded that police disarm the enemy clan before the remaining hostages are released.

Nestor Fajura, provincial police operations officer, said the negotiations with the gunmen included the disarming of both clans. "The Perezes will not disarm if the Tubays have the firearms. So both will be disarmed," he said.

Some of the hostages sat on the grass watching as Perez, a man in his 30s sporting a shaved head, was interviewed. He was armed with an M-16 rifle and was holding a grenade in his hand.

For decades, the Philippines government has armed civilian volunteers — often poorly trained and ill-disciplined — as a backup security force in areas with communist or Muslim insurgencies.

Human rights groups have called on the Philippines to stop arming civilians, saying the region is already awash with weapons from the continuing conflicts.

At least 100 government militiamen are among 161 suspects in last month's massacre of 57 people in an election convoy in Maguindanao province, on the opposite western side of volatile Mindanao Island.

The country's worst political killings prompted the government to send troops to disarm all paramilitary groups and declare martial law in the province. After the Nov. 23 killings, President Gloria Macapagal Arroyo created an independent commission to oversee the dismantling of clan-dominated private armies — which usually consist of government militias.