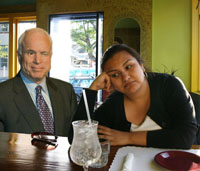 Young Hispanics born in the U.S. are less likely to drop out of school and live in poverty than young Hispanic immigrants, but they have higher exposure to gangs and violence, an independent research group says.

The study being released Friday by the Pew Hispanic Center paints a mixed picture of assimilation for a fast-growing group of U.S. citizens starting to wield their political rights: more education and job advancement, but also social problems.

The survey and analysis of census data found the high school dropout rate among all Hispanic youths ages 16-24 was 17 %, roughly three times higher than white youths and close to double the rate for black youths. But when broken down by second-generation Hispanics born in the U.S., the dropout rate falls to 8.5 %, roughly the same for youths of all races.

On the other hand, the American-born youths were twice as likely as their immigrant counterparts to have ties to a gang or to have gotten into a fight or carried a weapon in the past year. About 40 % reported they were either a gang member or knew a friend or relative who was, compared to 17 % for those who were foreign-born.

The U.S.-born Hispanics also were more likely to be in prison and perceive instances of racial discrimination.

"It is clear that many of today's Latino youths, be they first or second generation, are straddling two worlds as they adapt to the new homeland," according to the Pew report.

The findings come as growing numbers of children and grandchildren of Hispanic immigrants are being born in this country. Currently, two-thirds of Hispanics ages 16-25 are U.S.-born citizens. Due to high birth rates, these U.S. citizens will fuel a doubling of the overall Hispanic population to 30 % by 2050.

In electoral terms, Latinos have had less clout at the polls than their numbers would suggest. The changes could shift the nation's political discourse.

About 40 % of young foreign-born Hispanics say they attend church weekly, while roughly one-third of Hispanics in the second- and third-generation and higher say the same.