The Indian government agreed to carve a separate state out of the southern Indian province of Andhra Pradesh, which includes the information-technology capital of Hyderabad, following days of violent protests. 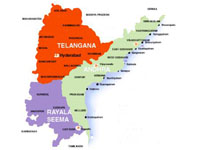 Supporters of Telangana statehood celebrate in Hyderabad on Thursday after the Indian government agreed to support their separatist demands in an effort to quell unrest.

The government's unexpected decision, which could spur social unrest and separatist demands in other regions, faces legislative hurdles -- and prompted 83 of Andhra Pradesh's 295 legislators to say they would resign in protest.

Hyderabad has been hit by protests from supporters of K. Chandrashekar Rao, who heads the Telangana Rashtra Samithi political party dedicated to establishing a separate state for the Telangana region of Andhra Pradesh, which includes Hyderabad.

After the government decision, Mr. Rao ended a hunger strike aimed at forcing the national government to support statehood for Telangana.

Late Wednesday, Home Minister P. Chidambaram announced an "appropriate resolution" for a Telangana state would be put forth in the Andhra Pradesh assembly soon.

With the assembly in limbo, it was uncertain how the effort to create a new state would move forward. A key battle will likely be whether the new state includes Hyderabad, a prospering city of four million.

Mr. Chidambaram, the home minister, invited Mr. Rao to New Delhi for talks with the government. The Congress party, which maintains its relatively strong governing position despite some recent setbacks, is viewed as sympathetic to the Telangana cause.

The party wouldn't accept a state without the inclusion of Hyderabad.

India is peppered with regions seeking statehood. The federal government's nod for Telangana statehood could raise similar demands from supporters of the formation of a Gorkhaland in West Bengal and Harit Pradesh in Uttar Pradesh.

The turmoil in the Andhra Pradesh assembly Thursday prevented the introduction of a resolution for a separate Telangana state. Andhra Pradesh Chief Minister K. Rosaiah said no bill would be put forward without "consensus." If the state assembly approves a statehood resolution, the federal government would then place a bill in Parliament.

It would need a two-thirds majority and the president's approval to establish statehood.

The Telangana region is spread over 10 of the 23 districts that make up Andhra Pradesh. Its separatist movement dates to 1956, when the region was merged with the state of Andhra Pradesh as part of a reorganization of states along linguistic lines formulated by Prime Minister Jawaharlal Nehru.

The Telangana Rashtra Samithi party, formed in April 2001 to support the separatist cause, argues that the region has been neglected by the government, with high poverty and unemployment rates and lack of proper irrigation facilities.

The Wall Steet Journal has contributed to the report.