Friday's Agenda on Summit in Copenhagen Grows out of Climate Talks

Together with climate talks participants of the summit in Copenhagen could not lose sight of other important issues requiring global cooperation. 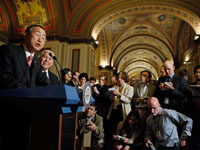 Friday's Agenda on Summit in Copenhagen Grows out of Climate Talks

On Friday, after resuming the climate fund negotiations, they will discuss the West's nuclear standoff with Iran and Tehran's violent suppression of pro-democracy protests.

EU leaders are expected to say they would support further U.N. sanctions against Iran unless Tehran starts cooperating over its nuclear program.

Before the summit got under way, British Prime Minister Gordon Brown and French President Nicolas Sarkozy agreed on the need for higher taxes on bankers' bonuses to compensate from some of the damage risky banking has caused to the global economy.