EU fails to perform the role of global leader in the fight against climate change due to the absence of unanimity. 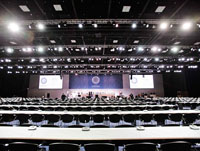 The european nations still can not decide how much they are willing to pay as a continent to help poor countries cope with and fight global warming.

"You will always find between 27 sovereign nation states that there are differences," Swedish Prime Minister Fredrik Reinfeldt told reporters after pledges fell well short of the euro6.6 billion ($9.72 billion) leaders were aiming for.

He said officials would continue to lobby through the night for more money and announce the figure Friday at the close of the two-day summit.

Seventeen of the EU's 27 members came up with offers of money totaling about euro5.4 billion ($7.95 billion) over the next three years, according to a French official. The official spoke on condition of anonymity because the talks are continuing Friday. That money would go toward $10 billion a year in fast-track funds for developing countries that negotiators at Copenhagen climate talks are trying to drum up.

The EU leaders had hoped that by putting a firm figure on the table they would incite other rich economies to work harder toward a new global climate pact at negotiations under way in Copenhagen.

Some EU nations — mostly in the bloc's east — that are still struggling to recover from the devastating fallout of the global financial meltdown. That has made them reluctant to participate in costly emissions cuts or to offer help for a fund intended to help developing nations cope with the effects of global warming and start curbing emissions before a new climate treaty being negotiated in Copenhagen comes into force in 2012.

But it wasn't only the poor nations waffling. France, Italy and Germany also were waiting until Friday to announce their pledges.

Leaders of richer EU nations want to set an example to spur other wealthy countries — notably the United States — into helping the developing world more, especially if they aren't making large emissions cuts. The U.S. is promising a 3 % reduction from 1990 levels.

Two years ago, the EU was ahead of the pack when it pledged to cut 20 % of emissions from 1990 levels by 2020 and to increase that to 30 % if other big polluters made similar promises. Japan and Russia have now outpaced Europe with 25 %cuts.