Wednesday the new proposal based on a large expansion of the Medicare program raised hopes among Democrats that the way may be clearing to pass their massive bill by Christmas. 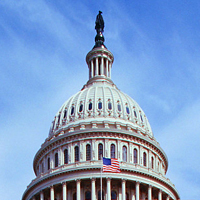 The deal, which emerged late Tuesday night after days of negotiations among a group of 10 Democratic senators, dropped the idea of a government-run insurance program. Moderates feared that such a program would be the first step toward a government takeover of the insurance system.

But by enlarging Medicare eligibility to Americans 55 and older, from the current 65 and older, the bill has attached itself to an existing government plan, the huge and hugely popular federal health insurance program for seniors. Potentially millions of Americans could sign up for a program that has been embraced by both parties as a safety net for the country's retirees.

The notion that the Senate healthcare bill might have suddenly expanded its base of political support quickly took hold Wednesday. President Obama endorsed the compromise. Many liberals who had been disappointed in the derailing of a government-run plan, or so-called public option, to compete with private insurers hailed the Medicare expansion idea, The Los Angeles Times reports.

It was also reported, even Democrats who were not thrilled with the buy-in program applauded the deal's central component: replacing the public option with two national private insurance policies under the oversight of the Office of Personnel Management, the agency that administers health benefits for federal employees.

"If there's 60 senators who can reach agreement, I'm for it," said Finance Committee Chairman Max Baucus (D-Mont.), a chief sponsor of the bill, who represents the kind of rural state that industry groups said would be harmed by a Medicare buy-in. "Sometimes you've got to do a little bit on the liberal end and a little bit on the moderate end to reach agreement. And that's what's going on."

Earlier Wednesday, President Obama gave the compromise a major boost, praising Senate Democrats for producing "a creative new framework" to provide coverage to uninsured Americans without relying on a public option, an idea that has long divided Democrats and threatened final passage, The Washington Post reports.

News agencies also report, t o console public-option supporters, the deal would also allow the roughly 3 million people between ages 55 and 64 without employer-provided coverage to buy into Medicare. Liberals have long talked up this idea as a way to gradually expand public insurance. And it faces stiff opposition from doctors and hospitals on the same grounds that they opposed an aggressive public option -- that it would reimburse them at intolerably low rates.

"It changes the game completely," said Henry J. Aaron of the Brookings Institution. "It would be far more significant, potentially, than the kinds of public options that the two houses have been reduced to."

But its practical impact depends on the fine print. Would some people, particularly those who have the hardest time finding coverage, be allowed to buy in before 2014, when the reforms would take effect? Would the premiums be more or less than the estimated value of basic Medicare, around $8,000 per year? Would drawing people in that age group help Medicare's finances, because they are younger, or hurt, because they might be in relatively poor health? And how would Medicare's rules square with those of the exchanges -- for instance, Medicare does not limit out-of-pocket costs for doctor's visits, but the exchanges would, The Washington Post reports.