In public at least, the early days of the climate summit here have been dominated by developing nations' furor over a proposed "Copenhagen Agreement" that leaked to environmentalists and reporters Tuesday. 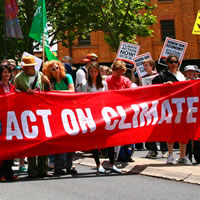 But many developing nations -- including China and India -- in fact had a hand in drafting the "Danish text," a source with deep knowledge of the negotiations said today.

Developing countries including China, India, Brazil, Algeria, Ethiopia and Bangladesh had "input into the process and product" of the proposed agreement, the source said , The Los Angeles Times reports .

Meanwhile, Ban Ki-moon, the UN secretary-general, has admitted to “trust issues” between rich and poor countries at the Copenhagen climate change conference.

But he is confident of getting international leaders to reach a deal to limit their countries’ carbon emissions at the talks, he said.

He also announced that £6.2 billion in aid to poor countries would be set aside and put down in international law within six months.

The breakdown followed the leaking of documents that showed world leaders will next week be asked to sign an agreement that hands more power to rich countries and sidelines the UN's role in all future climate change negotiations, Telegraph.co.uk reports.

The problem, the so-called "Danish text", a set of proposals drawn up by the Danish, the British and the Americans which, among others, proposed radical ideas which were instantly rejected by many of the world's poorer countries.

The basis of the document proposed that both industrialised and emerging countries cut carbon emissions to limit global warming and that the UN is sidelined in future talks about climate change.

The conference tried to get back to work, but in the small meeting halls and coffee shops that dot this huge sprawling venue, it was the topic that continued to dominate.

"The Danish text is dead in the water. Now we have to go back to the hard work that's been done since the Bali summit two years ago," the head of Greenpeace says.

"Let's not ignore what the negotiators have done but we should keep our eye on the prize which is to deliver to our children and grandchildren a fair, ambitious and binding treaty which secures their future," Aljazeera.net reports.