Barack Obama Declines to Comment on Americans' Arrests in Pakistan

The five had been reported missing from Virginia, and police are confident they were planning terrorist acts, a Pakistani police official told CNN. 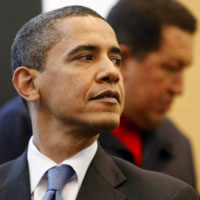 Barack Obama Declines to Comment on Americans' Arrests in Pakistan

Obama discussed the arrests Thursday on a visit to Norway, where he was awarded the Nobel Peace Prize. But but he declined to go into detail.

"I think the details are still forthcoming," Obama said. "There will undoubtedly be a series of investigations surrounding these events, so I'd prefer not to comment on them at this point , " CNN reports.

It was also reportd, Pakistani police said they arrested the five men, aged from 18 to their early 20s, in a raid on the house of a member of the banned militant group, Jaish-e-Mohammad (JeM), in the town of Sargodha in the eastern province of Punjab.

The FBI has yet to confirm their nationalities or identities, but Pakistani officials said the men were all US citizens, including three of Pakistani, one of Egyptian and one of Yemeni descent and had been staying at the house since November 30.

“We watched them for one and a half days and then arrested them," Usman Anwar, police chief of Sargodha, told reporters.

"We seized laptops and other things from their possession. Later we came to know that they have come here with the intention of ‘jihad’."

He also said they were "directly connected" to al-Qaeda, and planned to launch attacks inside and outside Sargodha, Times Online reports.

Meanwhile, law enforcement sources said they are investigating the case with extensive help from the men's families, who have turned over the men's writings and computer files.

"Of course we're concerned, but we don't have any reason to believe there was some big plot or some big plan," said one official, who spoke on condition of anonymity because the investigation is ongoing. "We're trying to find out who were these kids, what were they doing and why were they doing it. Our primary focus is, let's get them back safely," The Washington Post reports.