President Obama says he accepts the peace prize with humility, well aware of the controversy that surrounded the choice of the Nobel Committee. 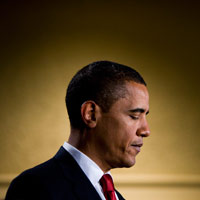 "In part, this is because I am at the beginning, and not the end, of my labors on the world stage. Compared to some of the giants of history who have received this prize - Schweitzer and King; Marshall and Mandela - my accomplishments are slight," he said.

But he says the most profound issue surrounding the award is the fact that he is the leader of a nation in the midst of two wars , Voice of America reports .

It was also reported, i n his speech at the award ceremony, Mr Obama said the United States must uphold moral standards when waging wars that are necessary and justified.

He said violent conflict would not be eradicated "in our lifetimes", there would be times when nations would need to fight just wars and he would not stand idle in the face of threats to the American people.

"Where force is necessary, we have a moral and strategic interest in binding ourselves to certain rules of conduct," he said.

"And even as we confront a vicious adversary that abides by no rules, I believe that the United States of America must remain a standard bearer in the conduct of war , " ABC Online reports.

Meanwhile, in Oslo, as in Copenhagen next week, when Mr Obama will attend the last day of the UN climate change conference, Scandinavian invitations have played havoc with his diary at a time when his overriding priority is to be seen to focus on the struggling US economy and an unemployment rate stuck at 10 per cent.

It is the economy more than any other factor that accounts for Mr Obama’s dramatically low domestic approval rating of 47 per cent, according to the latest Gallup poll. Overseas, if the Nobel committee is any guide, he is still regarded as a harbinger of change and an embodiment of hope.

Challenged to explain the decision to award Mr Obama the most distinguished Nobel prize, even though the deadline for nominations fell 11 days after he took office, Thorbjørn Jagland, the committee chairman, said in October: “Alfred Nobel wrote that the prize should go to the person who has contributed most to the development of peace in the previous year. Who has done more for that than Barack Obama?”

Since then Mr Obama has ordered 30,000 more US troops to Afghanistan and appealed to Nato to send another 7,000 to create a surge that his own liberal base regards as a surrender to hard-charging, politically savvy generals, Times Online reports.