Obama Is not Really Happy with the Nobel Peace Prize

Thursday, on the day of Nobel Prize  Presentation  the US President Barack Obama admits that he is not the one who really deserves the Nobel Prize Aword. 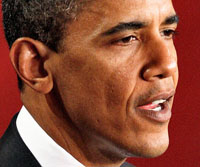 Obama Is not Really Happy with the Nobel Peace Prize

"I have no doubt there are others who may be more deserving," Obama said at a joint press conference with Norwegian Prime Minister Jens Stoltenberg, adding that he had been surprised to be named as the prize winner in October.

He however pledged to work to enact his pro-engagement foreign policy, including working for lasting peace and security in the world, stabilising Afghanistan, addressing climate change and cutting nuclear weapons.

"The goal is not to win a popularity contest or to get an award, even one as prestigious as the Nobel peace prize. The goal has been to advance America's interests.

"If I am successful in those tasks, then hopefully some of the criticism will subside, but that is not really my concern./.../If I am not successful, then all the praise and the awards in the world won't disguise that fact."

AFP  has contributed to te report.