Thousands of Jewish settlers and their supporters gathered in Jerusalem on Wednesday night in protest of a government-announced temporary construction restraint on West Bank settlements. 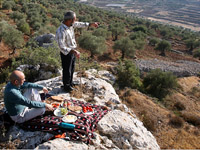 The crowd massed outside Prime Minister Benjamin Netanyahu's official residence, upholding signs and banners reading, among others, "Break the freeze" and "No entrance for Bibi's freeze inspectors."

Among the protestors were several lawmakers and settlement leaders. They urged the prime minister, popularly known as Bibi, to rescind the 10-month ban on new construction projects in West Bank settlements, and even warned that he might be remembered as a male factor.

"We are not here to ask for a compromise, the struggle will continue until the freeze is called off," Danny Dayan, head of the Yesha Council, an umbrella organization for Jewish settlers, was quoted by local news service Ynet as saying at the event.

The massive demonstration is the latest and strongest sign to date of the bitter resistance of Israel's right-wing camp and settler community to the new settlement policy Netanyahu declared late last month.

Over recent days, settlers have been taking different actions against the decree, including preventing government enforcement personnel from entering settlements, pelting them with eggs and blocking major roads.

In order to appease the mounting tensions, Netanyahu has repeatedly stressed that the policy, intended as a good-will gesture toward the Palestinians, served Israel's broader interests, and pledged that it was a one-time and temporary deal and that construction would resume as soon as the stated period ended.

Meanwhile, Israeli leaders also called upon opponents and protestors to abide by law, and vowed to fully enforce the decision "that was reached by law."

In a sign of the government's determination, authorities have so far arrested a number of protestors, including a settlement leader.

The situation on the diplomatic front leaves much to be desired either.

While Israel stresses that the moratorium marks a rare compromise by the Jewish state aimed to revive the stalled peace talks with the Palestinians, the Palestinian side has called it insufficient, as the restraint excludes some 3,000 settlement housing units already approved and construction in Jewish neighborhoods in East Jerusalem.

Accusing Israel of not being genuine, the Palestinians have repeatedly said that they would not return to the negotiation table until Israel totally freezes its construction in the West Bank and East Jerusalem.

About 300,000 Jewish settlers are now living in over 100 settlements in the West Bank, in addition to about 180,000 Jews dwelling in the Arab-dominated East Jerusalem. The Palestinians claim both territories as part of their future state.

The Xinhua has contributed to the report.