Tuesday night Senate Democrat leaders reached tentative agreement to abandon the government-run insurance plan in their health-overhaul bill and to expand Medicare coverage to some people ages 55 to 64. That decision clears the most significant hurdle so far in getting a bill that can pass Congress. 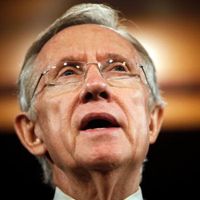 Liberals dropped the public insurance plan that was a central plank of the Democrats' health bill in favor of a more limited alternative, following intense pressure from a small group of Democrats who had insisted for months that it was a deal-breaker. While disputes over abortion coverage and other issues remain, Democrats appeared a whisker away from having enough votes to overcome Republican opposition and pass a sweeping health overhaul in the Senate.

The Senate bill -- including the lack of a public plan -- is likely to form the core of any final legislation, though it will have to be reconciled with a health bill passed by the House last month.

The agreement capped several days of high-stakes negotiations by a group of 10 Democratic senators -- five moderates and five liberals. Senate Majority Leader Harry Reid (D., Nev.) had advanced a bill that would have had the government directly operate a health-insurance plan, while giving states the right to opt out, The Wall Street Journal reports.

In the meantime, a leading liberal — former Democratic Party Chairman Howard Dean — and a much-courted moderate — Connecticut independent Sen. Joe Lieberman — both signaled they might be able to live with a compromise to offer private insurance plans under the auspices of the federal employee health program, while also allowing middle-aged people to buy into Medicare.

"I am encourged by the progress toward a consensus," Lieberman said in a statement issued by his office, which also underscored his opposition to a new government insurance plan that would compete with private carriers.

Dean, meanwhile, said the Medicare option for people age 55 to 64 was "a positive step forward." A physician, former presidential candidate and one-time Vermont governor, Dean has been one of the most vocal supporters of the idea that the government should get into the health insurance market.

It was also reported, the House of Representatives passed its own version of a healthcare overhaul last month that includes a government-run insurance option. The Senate and House bills must be reconciled and passed again before they are sent to Obama to sign.

If the Senate substitutes the non-profit plan, it will create particularly thorny negotiations. Some House liberals have already said they are unhappy with the compromises taking place in the Senate.