Developing nations who face huge climate change burdens are expecting that wealthy nations absorb more of the costs, as a leaked Danish document and fresh evidence of a hotter planet raised temperatures at the U.N. climate conference. 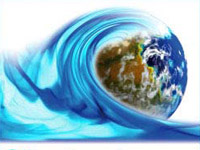 The small island nations, poor countries and those seeking money from the developed world to preserve their tropical forests were among those upset over competing draft texts attributed to Denmark and China outlining proposed outcomes for the historic Dec. 7-18 summit.

Some of the poorest nations feared too much of the burden to curb greenhouse gases is being hoisted onto their shoulders. They are seeking billions of dollars in aid from the wealthy countries to deal with climate change, which melts glaciers that raise sea levels worldwide, turns some regions drier and threatens food production.

Diplomats from developing countries and climate activists complained the Danish hosts pre-empted the negotiations with their draft proposal.

Lumumba Di-Aping of Sudan, the head of the 135-nation bloc of developing countries, said the $10 billion fast-track pledge from the U.S., European Union, Japan and other wealthy nations paled compared to the more than $1 trillion spent to rescue financial institutions.

"If this is the greatest risk that humanity faces, then how do you explain $10 billion — unless it is an inducement for some countries to accept the western-backed proposal?" he said. "Ten billion will not buy developing countries' citizens enough coffins."

The Danish draft proposal would allow rich countries to cut fewer emissions while poorer nations would face tougher limits on greenhouse gases and more conditions on money available to adapt.

"(It focuses) on pleasing the rich and powerful countries rather than serving the majority of states who are demanding a fair and ambitious solution," said Kim Carstensen of the environmental group WWF.

A sketchy counterproposal attributed to China would extend the 1997 Kyoto Protocol, which required 37 industrial nations to reduce emissions of carbon dioxide and other gases blamed for global warming by an average 5 % by 2012, compared with 1990 levels.

The Chinese text would incorporate specific new, deeper targets for the industrialized world for a further five to eight years. Developing countries, on the other hand, including China, would be covered by a separate agreement that envisions their taking actions to control emissions, but not in the same legally binding way. No targets would be specified for them.

Poorer nations believe the two-track approach would best preserve the principle of "common but differentiated responsibilities" recognized by the Kyoto treaty.

Such draft ideas are the usual grist early in such long, difficult international talks. These two proposals were not yet even recorded as official conference documents.

"It has no validity," key European Union negotiator Artur Runge-Metzger said, speaking of the Danish proposal. "It's only a piece of paper. The only texts that have validity here are those which people negotiated."

Earlier Tuesday, the U.N.'s weather agency unveiled data showing that this decade is on track to become the hottest since records began in 1850, with 2009 the fifth-warmest year ever. The second warmest decade was the 1990s.

Only the United States and Canada experienced cooler conditions than average, the World Meteorological Organization said, though Alaska had the second-warmest July on record. In central Africa and southern Asia, this will probably be the warmest year, it said.