Salahis Are Number 91 on List of White House Breaches

Salahi s are number 91 on a list of White House security failures that have occurred since the Carter administration, the Washington Post reports. 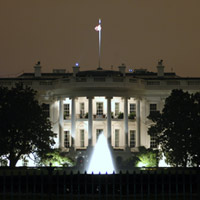 Salahis Are Number 91 on List of White House Breaches

The Post obtained a summary of a confidential 2003 report by the Secret Service that reveals they have experienced security breakdowns at least 91 times since 1980.

Eight of these intruders had contact with the president or another person under Secret Service Protection. These include the Salahis and four other incidents involving the same man , New York Daily News reports .

That was a subtext at the hearing called by Rep. Bennie Thompson (D-Miss.), the first black chairman of the committee. No one brought up directly how Obama's distinction as the nation's first black president could make him a bigger target. But Thompson acknowledged that he'd sensed a particular concern among African Americans. He warned against trivializing the action of Michaele and Tareq Salahi, reality TV hopefuls.

"This hearing is not about crashing a party at the White House. Neither is it about wannabe celebrities or reality television. On the contrary, this hearing is about real-world threats to the nation," Thompson said in his opening remarks.

Fears over Obama's safety came to the fore during the campaign, when polling showed that blacks were more likely to be concerned that someone might try to harm him. Some blacks talked openly about not voting for Obama out of fear for his life. He was put under Secret Service protection earlier than any presidential candidate in history , The Los Angeles Times reports .

Meanwhile, t he historical list of perimeter breaches indicates that intruders have reached the president or another person under Secret Service protection eight times since 1980, including the Salihis. Four of the incidents involved the same man.

The summary paints a disturbing picture of how difficult it is to stop determined intruders -- often mentally ill -- even as it notes that violent or commando-style raids have not occurred, and that terrorists or organized adversaries are unlikely to risk a head-on attack.

Then-Director Brian Stafford commissioned the review in 2001 after the service was humiliated for a third time by the most notorious presidential gate-crasher, Richard C. Weaver, who evaded inauguration security to shake George W. Bush's hand. Weaver, a California minister, had previously infiltrated a 1991 prayer breakfast attended by then-President George H.W. Bush, and Clinton's 1997 inaugural luncheon. He approached the younger Bush again at a prayer breakfast in 2003 before being arrested, The Washington Post reports.