Basescu scored 50.37 per cent in the ballot versus 49.63 per cent for Geoana, the Central Election Bureau announced on Monday. 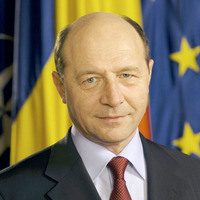 However, Geoana's Social Democrat party said it had proof of fraud in Sunday's election and would contest the result.

"Romanians voted for Mircea Geoana, but Basescu's state apparatus is trying to make him the presidential winner through fraud,'' Liviu Dragnea, the Social Democrat vice-president, told a news conference on Monday , Aljazeera.net reports.

It was also reported, all eyes were on vot es cast by Romanians living abroad, 147,000 of whom went to the polls for the second round, according to the foreign ministry. Their ballots were still being counted.

In the first round, Basescu won 56 percent of the diaspora vote.

Late Sunday, most exit polls put Geoana ahead in the tight election that the candidates labeled the most important since the fall of communism 20 years ago.

Just after polling stations closed on Sunday, the Social-Democrat candidate, a former diplomat who pledges to "reunite" Romania after years of political squabbling, loudly claimed victory in front of his supporters.

"Our victory is a victory for all Romanians who want a better life," Geoana said, accompanied by his smiling wife and two children.

But Basescu insisted he was the winner, telling his supporters: "I have won. I assure you that the correct exit polls show that I have beaten Mircea Geoana."

During the night, small groups of both candidates' supporters took to the streets to celebrate, Geoana's fans dressed in red, Basescu's in orange.

Meanwhile, in election offices around the country, party officials tallied their own vote counts.

Early Monday morning, they both claimed victory for their contender but the Social-Democrat party found a narrower margin than what exit polls had shown, putting Geoana at 50.3 percent, a figure based on 80.7 percent of polling stations.

News agencies also report, Basescu fought a campaign promising to fight corruption. He spoke to jubilant supporters: “Victory in this election is thanks to the Romanian people. Five million Romanians showed they made a clear choice towards modernising Romania.” The knife-edge vote also saw Basescu’s rival claim victory on Sunday night. His left-wing challenger, former foreign minister Mircea Geoana, held a triumphant rally in Bucharest after he seemed to be in the lead. The final result put him narrowly behind on 49.65%. The election has been one of the most important since the end of communism. The winner’s first task will be to form a government to try to unblock an IMF rescue deal for the crisis-hit economy, suspended because of the political uncertainty, euronews reports.