Around the country, mobile phone networks were cut off and foreign media had been banned from covering the annual commemoration of the killing of three students under the former shah in 1953. 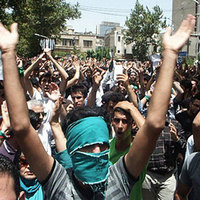 Supporters of opposition leader Mirhossein Mousavi chanted "Death to the dictator" and "Do not be scared. We are all together", according to witnesses at public rallies on university campuses.

Up to 20 mothers who have staged weekly protests in central Tehran's Laleh Park were in custody after a round-up , Telegraph.co.uk reports.

In the meantime, reformist opposition activists were expected to turn the state-authorized event into a protest against the government of President Mahmoud Ahmadinejad.

Since Sunday, Internet and cell phone services have been shut down or disrupted in areas where demonstrations were scheduled to take place.

The government also has banned foreign journalists from covering news, revoking their work permits in Tehran from December 7 to December 9.

Former Iranian President Akbar Hashemi Rafsanjani on Sunday accused Iran's rulers of being intolerant, and of silencing any constructive criticism.

The powerful cleric also called on anti-government protesters to express their views "within the framework of law," Voice of America reports.

It was also reported, neither Mousavi nor another opposition leader Mehdi Karroubi have issued direct calls for protests on Monday, but the former has challenged the authorities as they moved to prevent them.

"If you silence all the universities, what can you do with the situation of the society?" Mousavi asked in a statement posted on his website Kaleme.com.

He warned Iranian authorities they are "fighting with shadows in the streets," referring to protesters.

The conservative bloc of Iran's parliament, meanwhile, urged opposition figures to give up their "political obstinacy."

"... we have ample proof the reformists wanted to substitute the Islamic regime with a secular democracy" after the election, the official IRNA news agency quoted the statement as saying.

"... we recommend to the gentlemen to give up their behaviour which smells of political obstinacy."

The hardline Kayhan newspaper warned students to be cautious as the "hypocritic network (anti-revolutionary groups) want to cause casualties among the students participating in opposition gatherings and blame it on the regime." AFP reports.