Gordon Brown detailed plans to cut another £3 billion from the cost of running Government. The Oime Minister has primised to curb a "culture of excess" in senior public sector pay and bonuses. 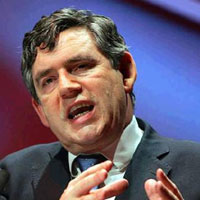 The Prime Minister said many salaries above £150,000 and £50,000-plus bonuses would in future require ministerial approval as part of an efficiency drive.

Top earners would also be publicly identified and bodies that wasted public cash "named and shamed", he said, warning that some had "lost touch" with reality.

Mr Brown said he hoped to shave 20% from the senior civil service pay bill over the next three years as the Government bids to cut the spiralling deficit, The Press Association reports.

It was also reported, he was warned that plans needed to go further and include the abolition of entire Whitehall departments in order to tackle the culture of centralisation in government.

The package includes £3 billion of new efficiency savings which Mr Brown said had been identified since the budget, on top of the £9 billion already announced. Around £1.3 billion will come from streamlining the Civil Service.

Labour would then offer a series of guarantees, from a promises to see a cancer specialist within two weeks, treatment within 18 weeks and GP surgeries in the evening and weekend. In schools they offer guarantees for every school leaver of a college place or employment and training opportunity.

One of the key ideas is to publish public service data to give citizens greater information and control.

"We will put in place the mechanisms that will enable every user of public services to shape the provision of them. The days when the state would tell what you were getting and you were supposed to be grateful are going... Information is the key. An informed citizen is a powerful citizen, Times Online reports.

Meanwhile, student loans, jobseeker's allowance, working tax credits and child benefit would be the first services to move, he said, with exclusively online VAT returns and employer tax returns by 2011.

"Our aim is – within the next five years – to shift the great majority of our large transactional services to become online-only – and this has the potential to save as a first step £400m but, as transaction after transaction goes online, billions more."

He promised that all public service performance data would be published online during 2010 with the process completed by 2011.

"Crime data, hospital costs and parts of the national pupil database will go on line in 2010.

"We will use this data to benchmark the best and the worst and drive better value for money. It will have a direct effect on how we allocate resources," guardian.co.uk reports.