A spokesman for Somalia's al Shabaab rebels denied on Friday that the group incited a suicide bombing at a medical graduation ceremony that killed at least 22 people, including three government ministers. 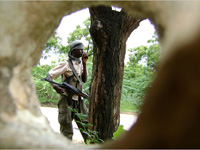 But analysts pointed out that the bloodshed had been a PR disaster for the insurgents, and the U.N. envoy to the country said it was "outrageous" to suggest anyone else was to blame.

Doctors, students and their parents were among the dead at Mogadishu's Shamo Hotel following Thursday's attack, which was the worst in the failed Horn of Africa state for five months.

Suspicion had immediately fallen on the hard-line al Shabaab group, which is battling the Western-backed government to impose its harsh interpretation of Islamic law across the country.

"We declare that al Shabaab did not mastermind that explosion ... we believe it is a plot by the government itself," al Shabaab spokesman Sheikh Ali Mohamud Rage told reporters. "It is not in the nature of al Shabaab to target innocent people."

"We know some so-called government officials left the scene of the explosion just minutes before the attack. That is why it is clear that they were behind the killing."

Western security agencies say Somalia has become a safe haven for militants, including foreign jihadists, who are using it to plot attacks across the impoverished region and beyond.

The U.N special envoy to Somalia, Ahmedou Ould-Abdallah, said insurgents had been behind most of the recent high profile acts of violence to afflict the nation.

"I think it is outrageous to suggest now that behind this killing is not the same group that killed the security minister, that attacked AMISOM (peacekeepers), that has stoned women and children to death," he told Reuters by telephone from Tokyo.

The United States accuses al Shabaab, the only Somali rebel group to have launched suicide attacks in the past, of being al Qaeda's proxy in the drought-ravaged country.