Trial Over Demjanjuk Was Called Spectacular

Entering the Munich court this week to cover the trial of John Demjanjuk, 89, accused of helping to force 27,900 Jews into gas chambers at an extermination camp in 1943, was like stepping into a history book. 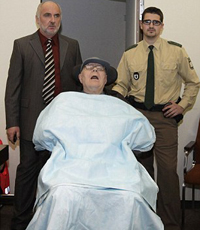 Trial Over Demjanjuk Was Called Spectacular

Inevitably, the spotlight was on Demjanjuk hObservers Call imself.

The Simon Wiesenthal Center’s most wanted Nazi war suspect lay under a white blanket on a mobile bed in the middle of the courtroom. Was this old, expressionless and clearly weak man really the “face of evil”?

Efraim Zuroff, head of the Wiensenthal Center’s Jerusalem office echoed the views of many observers , noting that Demjanjuk put on a great act. "He should have gone to Hollywood, not Sobibor.”

Even to those who believed he was making the most of his frail condition, it was a pitiful sight.

Perhaps most striking, however, was the presence of other Holocaust victims and witnesses of Nazi atrocities.

It was hard not to be moved as Thomas Blatt, a partially deaf 82-year-old survivor of Sobibor, struggled to follow the proceedings and told reporters he still had nightmares about his months at the death camp, in what is today Poland.

Or when Rudolf Solomon, 70, told the court in a breaking voice about a farewell letter his mother had thrown out of the train on the way to Sobibor, hoping somehow it would reach her family. After his emotional testimony, medics had to support him as he left the court.

Then there was Robert Cohen, 83, who rolled up his shirt sleeve to show the number branded on his arm at Auschwitz. His parents and brother were killed by Nazis.

These individuals, who belong to a generation that is dying out, said the trial was symbolic. Their main interest was in hearing the truth and being able to tell the world what they witnessed.

It can also be argued that this trial, probably Germany’s last big Nazi-era war crimes case, is crucial for younger generations.

It can help set the record straight on a defining moment in modern European history and even lead to a greater understanding of today’s policies. It helps explain why diplomatic relations between some European neighbours are still highly charged. And why European cooperation after World War Two — which eventually led to the European Union —  was so important. Politicians were intent on avoiding another war.

No one in Munich disputed that Germans were responsible for the Holocaust but survivor Blatt pointed out that the trial of Demjanjuk, who was born in Ukraine, served as a reminder that Germans were not the only people to kill Jews.

There is no easy answer to the question of how to deal with a Soviet prisoner of war such as Demjanjuk, who probably saved his own life by agreeing to be a camp guard with the SS. Especially 66 years later, when he himself is near the end of his life.

Blatt said he felt no hatred towards Demjanjuk. “There is no price he could pay that would come close to his guilt,” he said. “I just want to hear the truth.”

Demjanjuk’s lawyer, Ulrich Busch, argued his client was a small cog in a huge machine and many people in more senior positions than Demjanjuk had escaped justice.

But  the fact that Germany has made mistakes in the past in prosecuting war crimes suspects does not mean that Demjanjuk may escape trial.