Five British sailors who accidentally strayed into Iranian territorial waters were released by Iran on Wednesday after being held for a week. 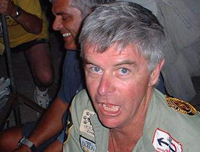 Speaking at a press conference after arriving in Dubai, sailors confirmed they were all initially blindfolded, except Smith who was told to steer their yacht to dock.

They said it was "very tense" to start with as they were questioned on suspicion of being spies, but were "treated very well" by their guards.

They were held in the same room, and given darts and a chessboard to pass the time.

The five were told they would be released when guards brought them breakfast on Wednesday morning.

Their families held a press conference at the Foreign Office in London shortly after their release.

They told how stressful it had been waiting for news, and said they feared their ordeal might last for months.

The five were freed after pressure from Britain. Foreign Secretary David Miliband said it showed diplomacy could work.

Iran's Revolutionary Guard, whose navy had stopped the vessel, said in a statement: "After carrying out an investigation and interrogation of the five British sailors, it became clear that their illegal entry was a mistake."

The Fox.News  has contributed to the report.