South African soccer and tourism officials are warning hotels, airlines and restaurants not to raise prices too high during next year's World Cup. 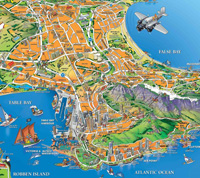 Tourism officials say they fear visitors will be deterred by exorbitant costs as hotels and guest lodges hike prices by up to 400 %.

Gilfellan oversees tourism in the country's top tourist destination, Cape Town and the surrounding Western Province. The seaside city will host several matches, including one semifinal.

Cape Town is famous for its harbour as well as its natural setting in the Cape floral kingdom, including such well-known landmarks as Table Mountain and Cape Point. Cape Town is Africa's most popular destination for tourism.

South Africa is expecting a tourism boom during the tournament, with some 500,000 visitors spending about $850 million, according to the Associated Press' report.