Osama Bin Laden is Wanted not Less than Eight Years Ago

Eight years after Osama bin Laden escaped from U.S. forces in Afghanistan, he remains on the run because of a lack of trust and coordination between Washington and Islamabad, experts say. 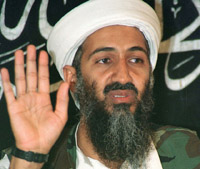 Osama Bin Laden is Wanted not Less than Eight Years Ago

U.S. President Barack Obama is on the verge of announcing that he will send more troops to Afghanistan. He has said he wants to focus efforts on dismantling bin Laden's al Qaeda, blamed for the Sept. 11, 2001 attacks that triggered the war.

A report by the Senate Foreign Relations Committee released on Sunday drew renewed attention to bin Laden's escape from the Tora Bora caves of Afghanistan in late 2001. The report blamed a lack of concerted effort by President George W. Bush's administration and U.S. military commanders for allowing bin Laden to escape.

"The failure to finish the job represents a lost opportunity that forever altered the course of the conflict in Afghanistan and the future of international terrorism," the report said.

The intelligence community widely believes bin Laden has been in hiding somewhere in Pakistan ever since, evading capture because Washington and Islamabad cannot coordinate well enough.