Bright weather greeted some two million Muslims who rallied around Mount Arafat, where Prophet Mohammad delivered his last sermon, to beg for God's forgiveness Thursday at the peak of the haj. 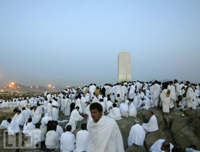 The death toll from heavy rainfalls that hit the port city of Jeddah, gateway for pilgrims to Mecca, rose to 48 people, most of whom were swept away by strong currents or drowned.

In Mecca, pilgrims flocked mostly by foot to Arafat to pray until sunset. They set up tents on a plain, squatted on the side of the road in shelters, or stayed at the nearby Namira mosque.

Wednesday's rainfalls, the heaviest the desert country has seen in years, prevented thousands of people from getting to Mecca from Jeddah but caused no deaths among pilgrims, Saudi haj organizers say.

The rain  was interpreted by pilgrims as  a blessing from God. The Muslims from all over the world will pray for world peace.

The pilgrims will later move to Muzdalifa to collect pebbles to stone a set of walls. The ritual represents defiance of the devil and commitment to resisting temptation.

About 1.6 million pilgrims have come from abroad for the haj, the world's largest regular religious gathering and a duty for all Muslims to perform at least once if possible.

Apart from floods in Jeddah, authorities have reported none of the problems or disasters that have marred the haj in previous years, according to Reuters' report.