Police Arrested the Guilty in Mass Murder in Philippines

Authorities say a scion of a powerful clan suspected in the massacre of 57 people in an election caravan in the southern Philippines has turned himself in. 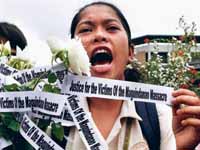 Police Arrested the Guilty in Mass Murder in Philippines

The dead from Monday's massacre include the wife, family and dozens of journalists and supporters of a gubernatorial candidate who wanted to challenge the rival Ampatuan clan, which has ruled the lawless province of Maguindanao unopposed for years.

Ampatuan's family is denying the allegations of his involvement in the slayings, according to the Associated Press' report.