Women Should not Endure Brute Force

Domestic abuse — still an unrecognised issue, but activists think it reasonable to encourage women to make a stand against it and fight for protection. 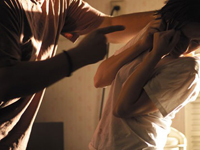 Women Should not Endure Brute Force

The International Day for the Elimination of Violence against Women is being observed today (Wednesday). A victim of gender violence, Aaisha is unaware of the 16 days every year marked to condemn violence against women. “What is the point of celebrating such days,” she asks. “Observing such days might help get certain people’s attention but I don’t know how it can serve those who really are the victims of violence,” she added.

Aaisha Jabeen has her own sad story of torture and humiliation in her marriage. The woman suffered hard from her husband’s irresponsible attitude, she was left with no choice but to leave him for good. She is now fighting a case against Ahsan (her spouse) for her children’s expenses.

International campaign against gender violence is held every year from November 25 to December 10.

Despite the alarming rise, people did not consider violence against women an issue, said a human rights activist, present at a vigil outside the Lahore Press Club on Tuesday.

Nepolean Qayyum, a peace and rights activist, said when victims themselves do not speak about violence, then there was less hope of others working to end it. Thus, it's up to victim to end or tolerate domestic violance.

The Daily News  has contributed to the report.