US to Announce Its Target for CO2 Emission Cuts

The United States is expected to declare concrete targets for cutting CO2 gas emissions . Meanwhile, pressure grows on polluters to find a formula for success two weeks ahead of a crucial climate summit. 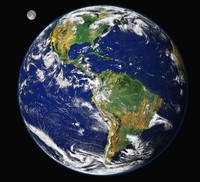 US to Announce Its Target for CO2 Emission Cuts

China has put the issue on the agenda of a summit meeting with the European Union next week and leaders of the 53 members of the Commonwealth, representing around two billion people, are set to address it at their weekend gathering in Trinidad.

And Australia, the world's heaviest per capita polluter, is attempting to rush legislation through parliament curbing emissions ahead of the December 7-18 climate conference in Copenhagen.

But experts say the key issue ahead of the summit is uncertainty over what, if anything, the United States will do to reduce global warming, widely considered a major threat to the survival of the planet.

That will become clear within days, US President Barack Obama's administration said late Monday, attempting to remove a major obstacle to the summit goal of finding a global treaty to replace the Kyoto Protocol which expires in 2012 , AFP reports .

The White House would also decide in the coming days when and whether President Barack Obama would attend the December 7-18 meeting, the official said.

The talks are meant to help forge a deal to fight global warming after the Kyoto Protocol -- a pact that binds countries around the world to cut emissions -- expires in 2012.

The United States, the world's biggest per capita emitter of greenhouse gases, is a critical player in the talks, but the Obama administration's position has been hampered by slow progress on a climate bill in the U.S. Senate.

Big emitters such as China, the world's top carbon polluter, are watching Washington for its position , Reuters reports.

Meanwhile, a second administration official briefing reporters on Monday said that Mr. Obama would have a stronger hand at Copenhagen if Congress had already acted on climate change legislation, but that the debate on health care had blocked it.

“We would have preferred that health care be done a long time ago, and we’d be having an energy debate today,” the official said.

Senator John Kerry, Democrat of Massachusetts, said Mr. Obama could credibly tell delegates to the climate conference that the United States intended to reduce its emissions by 17 percent to 20 percent, based on the legislation that has been approved by the House and the Senate environment committee.

“It's important for the president to exert that leadership with consultation with Congress,” Mr. Kerry said in an interview late last week.

Mr. Obama and leaders of a number of other major countries have said that the Copenhagen talks would not yield a comprehensive and binding treaty to address global warming. Instead, the more than 190 nations represented there are expected to produce an interim agreement that addresses the major issues without requiring ratification or international enforcement , The New York Times reports.