US to Send 34,000 More Troops to Afghanistan

The US president would make a prime time address to the American people to announce his plans for what he has described as "a war of necessity". 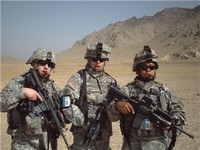 US to Send 34,000 More Troops to Afghanistan

Just as significant as the number of troops, however, will be pointers to a US exit strategy – something that will be closely watched by the British government, which is under public pressure to withdraw 9,000 UK troops from Afghanistan.

The White House plan contained "off-ramps" – points, starting as early as next June, at which Obama could decide to continue to increase troop numbers, halt deployments and adopt a more limited strategy or "begin looking very quickly at exiting", depending on political and military progress, guardian.co.uk reports.

It was also reported, while Gibbs did not specify a date, another administration official -- speaking on condition of anonymity because no official announcement has been made -- said the president would likely explain his thinking to the American people Dec. 1. Administration officials also said that the top U.S. general and the U.S ambassador in Afghanistan have been told to prepare to testify as early as next week before the congressional committees that would consider additional war funding requests.

Gen. Stanley A. McChrystal and Ambassador Karl W. Eikenberry have not been given a date for their congressional appearance, officials said, but have been told that their testimony would quickly follow Obama's announcement, so that they could offer details and support for the president's strategy for how to proceed with the eight-year-old war, The Washington Post reports.

Meanwhile, according to the poll, if the president decides to send a smaller number of troops than 34,000, 56 percent would oppose the move, with a little more than four in 10 backing the decision.

"Support for a smaller troop buildup drops most among Republicans" Holland said. "They appear most wary of doing things by half-measures in Afghanistan."

The survey also indicates that two-thirds of Americans said things are going badly for the United States in Afghanistan. That view is up 11 percentage points from March when 55 percent said things were going badly.

People questioned in the poll also were asked about the war in Iraq. Opposition to that conflict remains high, with 62 percent saying they oppose the war. But 57 percent said sending more troops into Iraq in 2007, known as the "surge," was a success.

The CNN/Opinion Research poll was conducted November 13-15, with 1,014 adult Americans questioned by telephone. The survey's sampling error is plus or minus 3 percentage points, CNN reports.