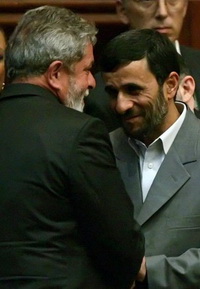 “If Iran is an important actor in this discord, then it is important that someone sits with Iran, talks with Iran and tries to establish a balancing point, so that society returns to a certain normality in the Middle East,” he said, in remarks before the meeting.

The Iranian president, Mahmoud Ahmadinejad, is making his first state visit to Brazil on Monday, arriving as Iran, the United States and other powers are engaged in fraught negotiations over an agreement to ship Iran’s nuclear fuel abroad, The New York Times reports.

News agencies also report, the Iranian president was accompanied by a 300-strong delegation, half of which were Iranian businessmen working towards Tehran's goal of lifting bilateral trade with Brazil from one billion dollars today to 15 billion dollars in the future.

Several protests over his visit have taken place, notably one on Sunday in Rio de Janeiro, where 1,000 members of Jewish, anti-racist and gay rights groups rallied against Ahmadinejad's tirades.

Sao Paulo 's governor, Jose Serra, who is seen as the leading potential candidate in presidential elections in October next year that will select Lula's successor, called Ahmadinejad's visit "undesirable."

"Democracy and human rights are indivisible and have to be defended in every part of the world," he wrote in an opinion piece published in the Folha de S. Paulo newspaper.

After his 24-hour Brazilian leg, Ahmadinejad was to depart for Bolivia for talks with his counterpart Evo Morales, then on to Venezuela to see his "friend" Hugo Chavez. Both Morales and Chavez are strongly critical of the United States, AFP reports.

It was also reported, Lula defended the visit, saying any progress on the nuclear standoff with Iran and on the stalled Middle East peace process required dialogue with all parties involved.

"It doesn't help isolating Iran," Lula, who has been pushing to bolster Brazil's clout on the world stage, said on Monday in his weekly radio address.

Lula, who has defended Iran's right to develop civilian nuclear energy, is expected to urge Ahmadinejad to accept the terms of global nuclear non-proliferation when the two meet later on Monday, Reuters reports.