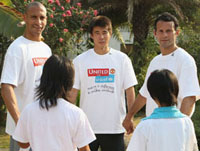 In a telephone interview Wednesday, Eric Goosby acknowledged the economic downturn was a concern, and that other U.S. government departments were cutting back. But he says President Barack Obama and Secretary of State Hillary Rodham Clinton have assured him his program, known as PEPFAR, remains among "the highest priorities."

In South Africa, the country with the world's highest AIDS burden, PEPFAR's budget was to grow from $550 million in the current budget year to $560 million for 2010-11. South Africa is the largest recipient of PEPFAR funds.