Gordon Brown intends to make a last-ditch appeal for Mr Blair when he arrives in Brussels this afternoon and attends a meeting of the Party of European Socialists. Tony Blair's flickering hopes of becoming Europe's first president could be extinguished before tonight's summit of EU leaders even starts. 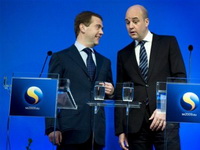 But if the consensus among the group remains against Mr Blair, it is thought that Mr Brown will revert to Plan B - which has not been disclosed, but is probably to secure Britain a top job in the European Commission as compensation.

Herman Van Rompuy, the Belgian Prime Minister, an economist who likes writing haiku poems, is the man to beat as the 27 EU leaders begin arriving in Brussels for a working dinner to determine the top jobs created by the Lisbon Treaty, Times Online reports.

It was also reported, European Union leaders were set to hold an informal dinner summit in Brussels on Thursday evening to reach a final decision on who should take the top three positions created by the Lisbon Treaty, which takes effect December 1.

The president will preside over and assist the 6-month rotating presidency currently held by Sweden. His main role will be to increase continuity in guiding the European Council, the most important institution of the European Union.

He will lead meetings of EU foreign ministers in the Council and will rely on a new 'External Action Service' comprised of staff from the Council Secretariat, the Commission, and the member countries.

The secretary-general will guide the Council of Ministers and its 3,200 bureaucrats, helping to ensure the smooth functioning of the institution.

Javier Solana had officially held the position, as well as the 'High Representative for the Common Foreign and Security Policy.' The new secretary-general will be able to focus on managing the Council while the new high representative can concentrate on foreign affairs, Monsters and Critics.com reports.

Meanwhile, Fredrik Reinfeldt, the Swedish prime minister, whose country holds the EU's rotating presidency, has appealed to leaders to keep the horse-trading to a minimum.

"I need of course the collaboration of my colleagues to try to get this through," he said.

Angela Merkel, the German chancellor, who has pledged to push for a common candidate along with Nicolas Sarkozy, the French president, said on Wednesday that she was confident a candidate would be agreed on by Thursday night.

"I'm optimistic that we will have an agreement [Thursday] evening," she said, Aljazeera.net reports.