Thursday AirTran Airways announced that it had to cancel 38 flights and postpone dozens more because of a computer glitch at the Federal Aviation Administration. "AirTran Airways is asking passengers flying this morning to check the status of their flights at www.airtran.com prior to coming to the airport," the airline said in a statement. Network systems to the FAA computer that tracks flight schedules went down just after 5:15 a.m. ET, and is expected to impact hundreds, or maybe thousands of flights across the U.S. There is no estimated time for a fix, the FAA said earlier, MarketWatch reports. 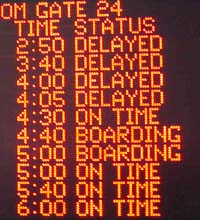 It was also reported, the system went down sometime between 5:15 a.m. and 5:30 a.m., ET, according to Federal Aviation Administration spokesman Les Dorr.

"Normally information on flight plans are sent automatically" to the FAA, which tracks flights across the country, Dorr said in an interview. "But because it's down, the airlines are emailing or faxing their plans to us so they can be entered manually."

A number of other systems are also affected, but radar and communications have not been impacted, Dorr said.

"We can still talk to airplanes and track them on radars," he said.

Dorr said he couldn't predict the impact to flights, of which there are thousands a day, MarketWatch reports.

Meanwhile, one passenger said that a Delta Air Lines gate agent had announced that the glitch prevented pilots from accessing flight plans, the Atlanta Journal-Constitution reported.

Ms. Bergen described the problem as “more of a convenience issue” than a safety problem, as delays at the nation’s busiest passenger airport began progressively affecting flights into dozens of other airports.

She said that flights already in the air had “radar coverage and communications”; only planes on the ground were affected.

Passengers were urged to check with airlines before traveling to the airport.

An F.A.A. online airport status map showed delays early in the day only in Atlanta and Houston. By 9:30 a.m. Eastern time departure delays on Atlanta-bound flights were indicated at Kennedy, La Guardia and Newark airports in the New York area, Philadelphia International, O’Hare in Chicago, and Dulles and Reagan National airports in the Washington area, The New York Times reports.