Huge explosions and fire rocked a Russian ammunition depot Friday, leaving dozens of people missing and prompting the evacuation of thousands of civilians nearby, officials and Russian news agencies said. 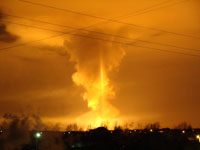 The blasts and fire erupted while ammunition was being destroyed at the arsenal in the Ulyanovsk province, according to the Federal Security Service branch in the region, 720 kilometers (430 miles) east of Moscow. The explosions and fire continued to rage for hours.

Provincial governor Sergei Morozov said 35 people who were working at the facility were considered missing, the Interfax, RIA Novosti and ITAR-Tass news agencies reported. Morozov was quoted as saying 10 people were hospitalized and 3,000 people were evacuated.

Several explosions and fires have occurred at munitions storage facilities in the former Soviet Union in recent years. There has been no indication of terrorism in the conflagrations, according to The Associated Press's report.