V11 Give Accent to Global Contribution to Climate Issue

A group of 11 countries vulnerable to adverse effects of global warming urged world leaders Tuesday to reach a binding agreement at next month's global conference on the issue. 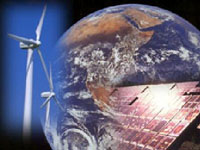 V11 Give Accent to Global Contribution to Climate Issue

The countries called on President Barack Obama and leaders of emerging economies such as India and China to personally attend the talks in Copenhagen.

Bangladesh, Barbados, Bhutan, Ghana, Kenya, Kiribati, the Maldives, Nepal, Rwanda, Tanzania and Vietnam — calling themselves the V11 — pledged at the Climate Vulnerable Forum in the Maldives to commit to greening their economies as their contribution toward cutting emissions of carbon dioxide and other greenhouse gases.

The low-lying Maldives has become an outspoken voice on global warming, even staging an underwater Cabinet meeting last month to promote awareness about rising sea levels.

It is feared that rising seas could swamp the Indian Ocean archipelago within a century. Its islands average 7 feet (2.1 meters) above sea level.

Maldives has already pledged to become the world's first carbon-neutral nation and last month announced plans to build a wind farm that can supply 40 % of its electricity. Carbon neutrality refers to achieving an equal balance of the amount of carbon dioxide — the leading greenhouse gas — emitted and the amount sequestered or offset.

U.N. scientists say rich countries must cut carbon emissions by 25-40 % from 1990 levels by 2020 to prevent Earth's temperatures from rising 2 degrees Celsius (4 degrees Fahrenheit) above its average temperature before the industrial era began 150 years ago. Any rise beyond that could trigger climate catastrophe, they say.

So far, reduction pledges total 11-15 %, but those could be seen as negotiable.